Before we get started, I thought I’d share that S.T. Cartledge interviewed me on his blog “The Manifold,” my first time on that side of an interview. You can find it here.

With two books published and more on the way, Andrew J. Stone has accomplished a lot in his mere 26 years. I had the opportunity to learn a little more about this wunderkind author. Enjoy!

Click here for my review of his novella All Hail the House Gods.

ZÉ BURNS: When did you start writing?

ANDREW J. STONE: When I was eighteen. So like eight years ago.

ZB: Who are your influences?

ZB: How did you discover bizarro fiction and why do you write in this genre?

AJS: I discovered it through the now defunct Lazy Fascist Press (RIP). Len Kuntz, an extraordinary short story horror writer reviewed Sam Pink’s I’m Going to Clone Myself and then Kill the Clone and Eat It, and I knew I had to read it. Took a trip to Powell’s in Portland while in undergrad (Seattle Pacific University) and found that book in their lovely small press section, and since then I have been hooked.

Alice’s Adventures in Wonderland has always been my favorite book since I first read it when I was like fifteen or sixteen, but I always thought it was an anomaly. When I first started writing, I wrote poetry, literary fiction, and literary horror. But after discovering bizarro and realizing there was a modern market for the types of weird books I love, I had to write bizarro.

ZB: What are you reading now?

AJS: Crisis Boy by Garrett Cook, The Way We Came In by Kelby Losack, The Drip Drop Prophet and Other Stories by Austin James, and Capital Vol. 1 by Karl Marx.

ZB: What keeps you writing?

AJS: I think I would lose my mind without writing. It also helps keep me clean. But mostly, I strive to inspire the masses through my work (hopefully without being preachy). 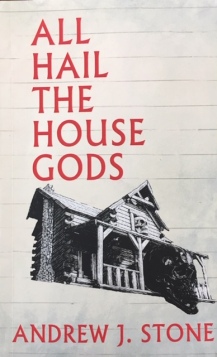 ZB: ALL HAIL THE HOUSE GODS has sentient talking houses and THE MORTUARY MONSTER has a cemetery of living corpses. How do you create these out-of-the-box concepts?

AJS: AHTHG came to me during a writing exercise in grad school. I was given an image of two upper-class medieval towns separated by a bridge. And naturally, what else could I have written from that? I also wanted to explore different forms of revolution against an unbeatable, fascist government and satirize the ways in which settling down with a family and procreating placates the masses (yes, I understand I got married at twenty-one and had twins at twenty-six).

I was at a real low point when the idea for TMM came to me. I had just quit drinking (at twenty-one) because my alcoholism was starting to destroy my life. I was as close to rock bottom as I have been. I felt real low and shitty about myself, and creating an unlikable, yet sympathetic character felt cathartic. I also really dig The Addams Family and Tim Burton. But oddly enough, Vonnegut and Steinbeck (especially Cannery Row) were significantly bigger influences for that book.

ZB: With a day job and new twins, how do you find time to write?

AJS: It is a struggle for sure. The novella I’m currently working on has been in the works for about eighteen months and I only have 22k words. It’ll end up being just over 30k, and I’m real determined to finish it soon, especially because I have a couple of other novellas I am really excited to write.

ZB: What can we expect to see from you in the future?

AJS: If all goes well with my WIP, a weird sea monster novella about a part-time cryptozoologist and full-time alcoholic will hopefully be available sooner than later. I also have a book accepted for publication by Rooster Republic Press due out in 2020. It’s called The Ultimate Dinosaur Dance-Off. And for any Spanish readers out there, my latest book, All Hail the House Gods, will be translated into Spanish by the wonderful Colombian press Ediciones Vestigio tentatively due out in the early summer of 2020.

ZB: Is there anything you would like to plug?

AJS: Yes! Read Rios de la Luz. All her books. She is one of my favorite writers working today. Also, check out my Facebook (Andrew James Stone (and add me as a friend, I’m nice)) and follow me on Twitter and Instagram (both handles are @Andrewosaurus96)

I want to thank Andrew for his time. Keep an eye on him: he has the potential to do something great.