How did I become the writer I am today? Books, of course. Anyone who tells you that reading isn’t important for writing is a stinking liar. I can trace my evolution of thought and style precisely by examining the books that made the greatest impact on me.

The Cloven Viscount & the Nonexistent Knight by Italo Calvino

It all began with Italo Calvino. I couldn’t have been older than fifteen when my friend Jennifer (my source for good books) gave me her copy of this odd book. This was the age when I was devouring two or three fantasy doorstoppers a week. Here were two literary novellas written in a bizarre, fabulist style. It was like a glass of water in a sea of vinegar. Up until then, my writing consisted of mushed together fantasy clichés. For the first time, I ventured outside swords and magic and wrote The Point, my first (horrible) attempt at literary fiction. I never got past the fourth chapter, but a whole new world had opened up to me. 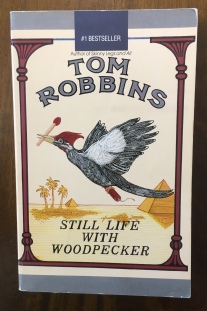 One of my favorite bookstores in the world is the Vashon Bookshop on scenic Vashon Island. I spent hours perusing the shelves in my teenage summers when my family visited the island. The owner Karen was my literary guide, introducing me to so many of my favorite books. As my interest in fantasy waned, she helped me grow as a reader. One of her first recommendations: Still Life with Woodpecker. Tom Robbins is one of my favorite living authors and this was a perfect, accessible introduction to his work. I savored the weirdness that dripped from this book, ultimately becoming the catalyst for my Surrealist awakening less than a year later.

I Served the King of England by Bohumil Hrabal

My trip to Prague at age 16 changed me forever. For it was here that I discovered Surrealism. I talk about this experience in greater detail here, so I’ll simply describe it as an “awakening,” an instant obsession that changed who I was. I needed to read as much as I could, as fast as I could. So I visited the now defunct Anagram Bookstore—the only English-speaking book purveyor in Prague. I begged the clerk for everything Surrealist that they had. He gave me three books: Nadja by André Breton, a collection of poems by Vitězslav Nesval, and I Served the King of England. The first two were inaccessible to me at the time, but Hrabal’s book (not actually Surrealist) pulled me in and established the author as a cornerstone of my literary obsession.

The Trial by Franz Kafka

I’ve read The Metamorphosis and loved it. I’ve read The Castle and felt cheated. But Kafka’s The Trial sits atop the pinnacle of literature. That’s not just me saying that. Le Monde considers it the third best book of the 20th century. And the most remarkable part? It was never finished. Reading this book had a profound effect on me. It was far more than words on the page. I was Joseph K. I could feel the overwhelming claustrophobia of his situation more deeply than any other book. Before I read it, I never knew literature could have such an effect on me. If I could only siphon a drop of Kafka’s brilliance …

I thought I knew weird, but Burroughs proved to me that I didn’t know jack. These heroin-fueled vignettes showed me just how weird weird could be. Even with my discovery of Surrealism, I still held back. I wanted to publish a book one day and no publisher would ever accept the bizarreness inherent in my work—keep in mind I hadn’t discovered bizarro fiction yet. This book signaled a second awakening for me. My discovery of Surrealism had lifted my eyelids to a squint. Now they were wide-open, bugging from my head.

He Digs a Hole by Danger Slater

After searching for almost a decade, I found my home in bizarro fiction. It was Danger Slater’s novella that greeted me on arriving. It was everything I ever wanted in a book, but never knew existed. I remember reading it with a smile plastered on my face. Danger has been one of my greatest influences as a bizarro writer. In fact, the best way to describe my current work-in-progress is “Slaterian.” When I passed through this threshold, I came out with undying enthusiasm, stronger than any I’d had in all my years as a reader.

The list is in no way finished. As I continue to read, more books and authors will come along to change who am I and how I write. It is a lifelong evolution—an adventure that I eagerly look forward to.

I would love to hear what books changed you into who you are today, whether you’re a writer or not.

2 thoughts on “Bizarre Books That Made Me a Writer”