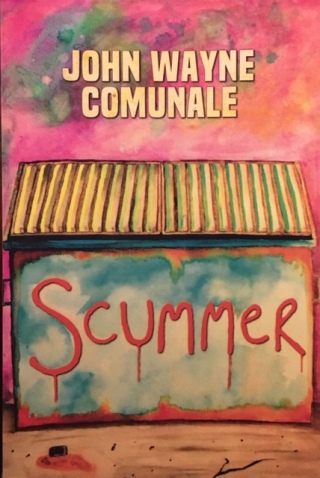 John Wayne Comunale shows us a grimy world: the filth and stench palpable. But he also invites us to search for meaning in our lives, to find the pillar that can support us in the scary chaos of the world around us.

Meet Scummer. He drinks the backwash from leftover beers, smokes discarded cigarette butts, and is forever picking his panoply of scabs. He is someone we’ve all seen before on the wrong side of town. Someone we try to ignore or hold our breath as they pass by. Someone that we forget is just as human as we are.

Loveably oblivious and humorously awkward, the  main character sees this a different way. He is lost in life: divorced, jobless, searching everywhere for his true self. Scummer provides the answer. The main character encounters him half-drowning in an unflushed urinal and feels called to him, seeing him as a teacher, a messiah even.

The main character then embarks on a transformation to “scum” just like his idol. Though the concept itself is bizarre, John Wayne uses the surreal to tell a story that could not be otherwise told. He does this subtly, applying impossibilities to an already crazy world, enough to ground the reader in reality before sending them off into the ether.

John Wayne is a master of description, weaving narrative simply by describing characters and settings. His prose is well-constructed, each word perfect in its place, but without pretension. Through pretty language, he describes vile things, the juxtaposition powerful.

The story is ridiculously readable. You might want to set a timer when reading: this book will pull you in and not let you go. I can see it easily converted into a film. Hollywood producers get on it!

Scummer requires a sturdy stomach to read—at least at first. But if you are willing to be grossed out, the reward is great. And believe me, you’ll want to take a shower after all this. Or maybe not. You may never want to bathe again.

NEXT WEEK: An interview with John Wayne Comunale!

One thought on “Book Review: SCUMMER”